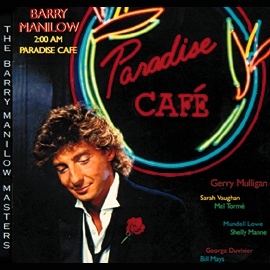 The title and the concept came to me in a dream. I always know I’m onto something when I get ideas in dreams. These projects always go smoothly. PARADISE CAFE was composed and recorded in less than two months.

My dear writing colleagues and I finished composing all the songs within weeks. It took no time for me to arrange the entire album. And all the stellar musicians and singers agreed to join me without hesitation.

Working with these legendary men and women for an entire week was a thrill I will never forget. Hearing them play and sing my music was one of the most profound gifts I have ever received.

Out of all my albums, this is the one I’d like to be remembered for.