Barry Manilow’s A Gift Of Love 5 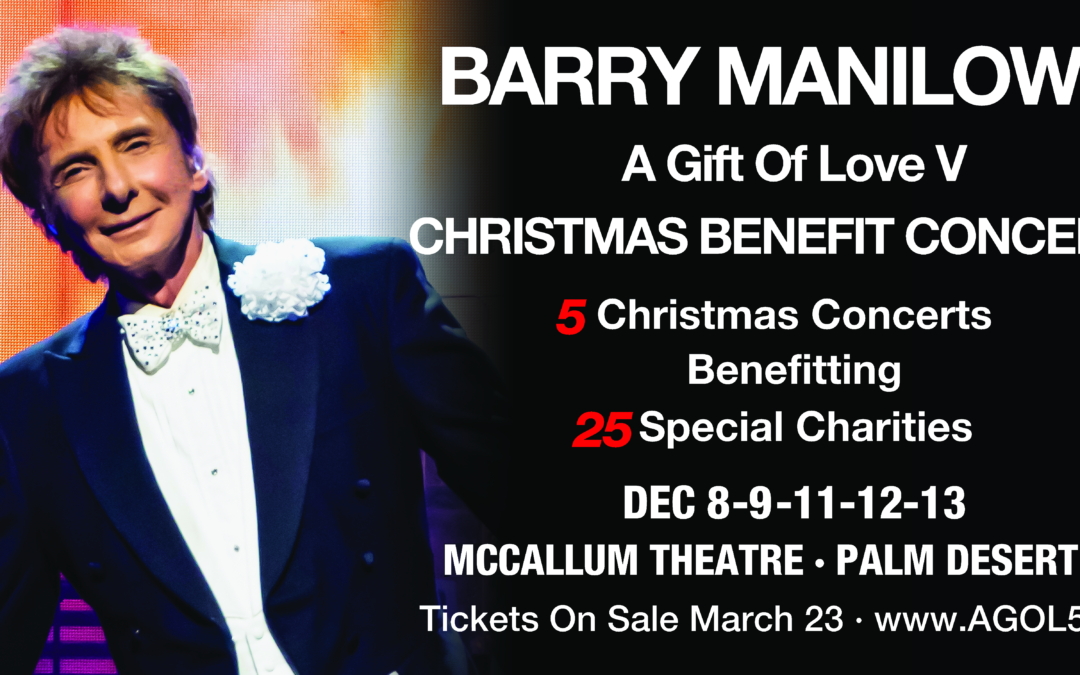 Scheduled to take place at Palm Desert’s McCallum Theatre, Manilow’s A Gift of Love V concerts will feature his hit songs and holiday favorites for the fifth time to benefit 25 Coachella Valley charities. His past holiday concerts have surprised audiences with a children’s choir, Santa Claus, and even snow!

All tickets and packages go on sale Monday, March 23rd at 10am PDT by clicking the links above or by phone at 424-298-4818. Tickets for the concerts will not be available at the McCallum box office.

Regular individual ticket prices range from $59.99 to $499.99 each.  In addition, the McCallum adds a $3.00 per ticket Facility Fee.  The information below describes how much of the ticket price is credited to your organization and what “extra” benefits are included as part of the price.

Gold Tickets sell for $1000 each, with  $400 of that automatically credited to your charity when the purchaser designates your charity as the beneficiary.  Gold Tickets are located in the first five rows of the theater.  Gold Ticket holders are invited to a post- show champagne reception and photo-op with Barry in the theater’s Founders Room.

There are 4 Sponsorships available each night with 4 tickets included in each sponsorship package.
Sponsorships sell for $12,500, with  $8750 automatically credited to your charity when the purchaser designates your charity as the beneficiary.  Sponsorships include four tickets in the first five rows, post-show champagne reception and photo-op with Barry in the Backstage Christmas Court, prominent placement in all print advertising and a lobby placard listing the sponsorship.

In addition to the VIP tickets, there are also regular concert tickets priced from $59.99 to $99.99.  At the time of purchase, the purchaser can designate their favorite charity (from the list of 25) to benefit from the purchase of their tickets.  For each of these individual tickets,  25% of the face value is credited to the designated charity.

When you complete your order you will be asked to designate one of the 25 participating charities as the beneficiary.

Mr. Manilow contributing his performances to the A Gift of Love 5 concerts and will not be compensated.