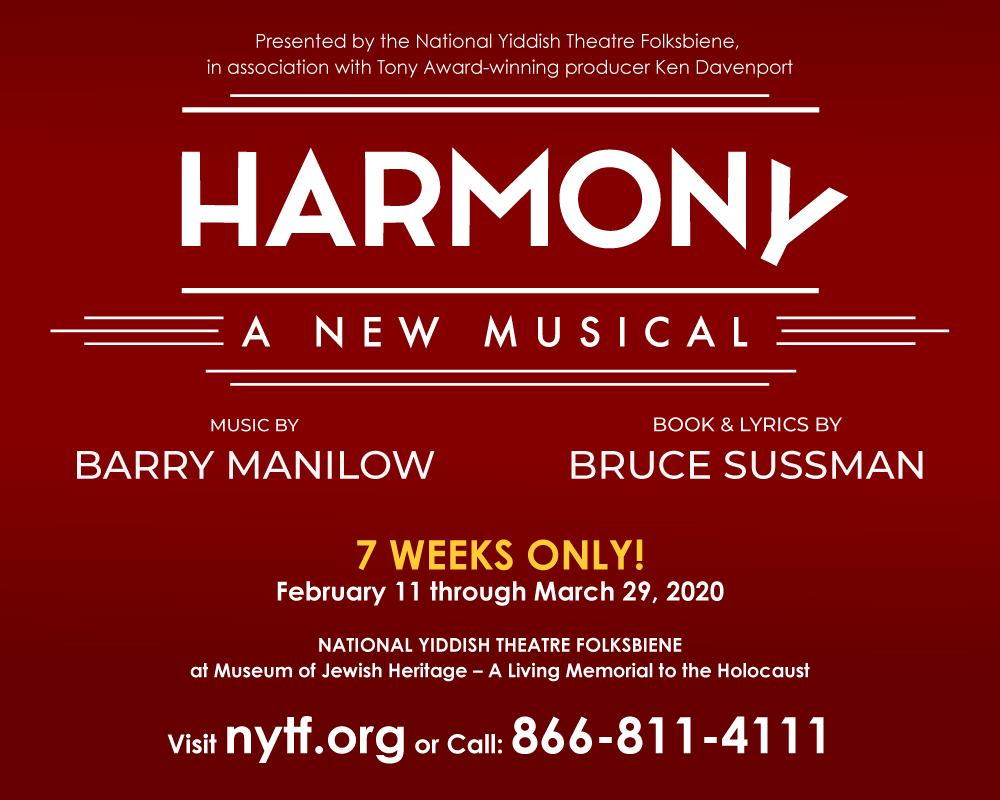 -Harmony tells the true story of the Comedian Harmonists, Six Talented Young Men Who Took the World by Storm in 1920s Germany-

The musical tells the true story of the Comedian Harmonists, an ensemble of six talented young men in 1920s Germany who took the world by storm with their signature blend of sophisticated close harmonies and uproarious stage antics, until their inclusion of Jewish singers put them on a collision course with history.

Fresh from the stellar success of Fiddler on the Roof in Yiddish, which won multiple honors including a 2019 Drama Desk Award, NYTF will present Harmony in English, with previews beginning February 11 and the production running from March 4-29, 2020 at the Museum of Jewish Heritage – A Living Memorial to the Holocaust, Edmond J. Safra Plaza, 36 Battery Place, NYC. For tickets to Harmony, and other performances in NYTF’s season of “Spiritual Resistance,” visit NYTF.org or call 866-811-4111. For group sales and membership call 212-213-2120 Ext. 204.

Directing and choreographing Harmony will be Tony Award winner and Emmy nominated Warren Carlyle, who won a 2014 Tony Award for his choreography for After

Midnight, for which he also received a direction nomination, and was nominated for a 2019 Tony for choreography for the revival of Kiss Me Kate. His other Broadway credits include Hello, Dolly!, She Loves Me, On the Twentieth Century, The Mystery of Edwin Drood. A Christmas

Story, and Chaplin, and he directed and choreographed Hugh Jackman: Back on Broadway and did the same for Hugh Jackman’s 2019 World Tour.

“I’m thrilled to be directing Harmony and helping bring this show to New York. It’s an important message and it could not have found a better home to start a New York run than the National Yiddish Theatre Folksbiene at the Museum of Jewish Heritage – A Living Memorial to the Holocaust,” Warren Carlyle said.

“National Yiddish Theatre Folksbiene is excited to bring Harmony to New York City,” said Zalmen Mlotek, Artistic Director of NYTF. “Harmony speaks to the human spirit in the face of adversity and atrocity. The story of the Comedian Harmonists, whose soaring careers were cut short due to anti- Semitism, reflects the spiritual resistance that was necessary to get through one of the most dehumanizing periods in history. It’s important that their story about the human spirit during the darkest of times be told. Barry Manilow and Bruce Sussman have created a show that speaks to the best and worst of humanity.”

“Harmony is moving full-steam ahead with the addition of this exceptional creative team, led by the supremely talented Warren Carlyle, who will bring our labor of love to life as a testament to the triumph of the human spirit,” Barry Manilow and Bruce Sussman said.

Harmony is part of NYTF’s season of “Spiritual Resistance,” which features artistic and theatrical works that explore themes of struggle against oppression. The programming – which includes The Sorceress: A Yiddish Musical Fantasy, a fairytale-like story of a pure-hearted young woman who triumphs over her tormentors, a scheming stepmother, and a wicked witch – provides artistic expression

concurrent with the exhibition Auschwitz: Not long ago. Not far away. being presented at the Museum of Jewish Heritage – A Living Memorial to the Holocaust.

Now celebrating its 105th season, Tony Award-nominated and Drama Desk Award-winning National Yiddish Theatre Folksbiene (NYTF) is the longest consecutively producing theatre in the US and the world’s oldest continuously operating Yiddish theatre company. NYTF is in residence at

the Museum of Jewish Heritage – A Living Memorial to the Holocaust. Under the leadership of Artistic Director Zalmen Mlotek and Executive Director Dominick Balletta, NYTF is dedicated to creating a living legacy through the arts, connecting generations and bridging communities. NYTF aims to bring history to life by reviving and restoring lost and forgotten work, commissioning new work, and adapting pre-existing work for the 21st Century. Serving a diverse audience comprised of performing arts patrons, cultural enthusiasts, Yiddish-language aficionados and the general public, the company presents plays, musicals, concerts, lectures, interactive educational workshops and community-building activities in English and Yiddish, with English and Russian supertitles accompanying performances. NYTF provides access to a century-old cultural legacy and inspires the imaginations of the next generation to contribute to this valuable body of work.

The Museum of Jewish Heritage – A Living Memorial to the Holocaust is presenting the most comprehensive exhibition about Auschwitz ever seen in North America, Auschwitz: Not long ago. Not far away. until January 3, 2020. (Tickets are available now at auschwitz.nyc.) The exhibition features more than 700 original objects and photographs from over 20 international institutions, including rare artifacts. As visitors walk through the 20 thematic galleries, they will see the development of Nazi ideology and the transformation of Auschwitz from an ordinary Polish town known as Oświęcim to the most significant Nazi site of the Holocaust—at which ca. 1 million Jews, and tens of thousands of others, were murdered. This exhibition was produced in partnership with the international exhibition firm Musealia and the Auschwitz-Birkenau State Museum in Poland.