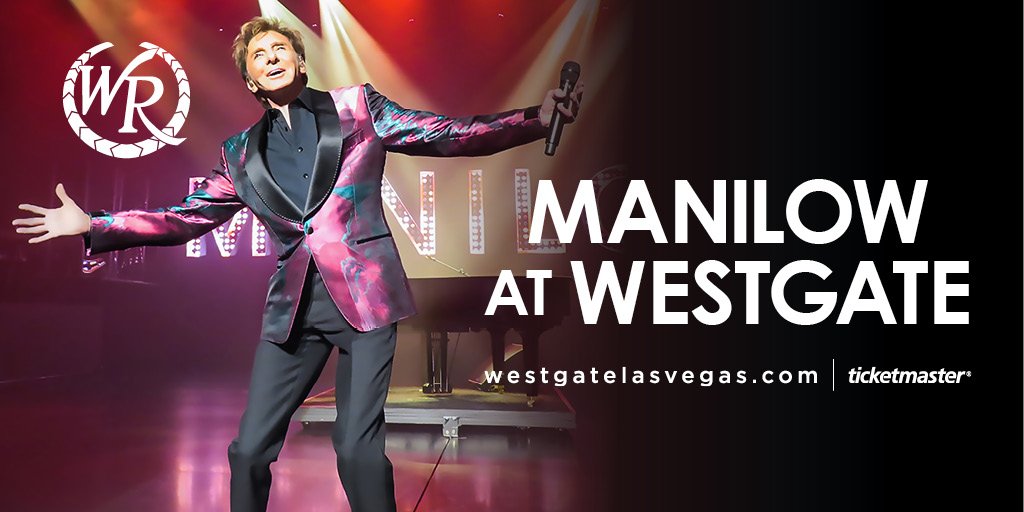 The Hits Continue at the Westgate International Theater

MANILOW: LAS VEGAS – The Hits Come Home! made its debut in May 2018 to rave reviews and sold-out audiences and earned the Best of Las Vegas awards for Best Resident Performer/Headliner in 2018 and again in 2019.  This spectacular show is unlike anything Manilow has ever done in his concert tours around the world before with massive video walls, sets, and special effects – a non-stop evening of Manilow’s massive catalogue of Top 40 Hits.

The extension marks the continuation of a very successful partnership between the iconic property and Barry Manilow, who celebrated his 500th show in the famed International Theater earlier this year.  “We are very happy to extend Barry Manilow who leads a long list of legendary entertainers who have performed at this iconic property,” said Westgate Las Vegas President & General Manager Cami Christensen. “Barry is part of our family and the Westgate will always be his Las Vegas home.”

Manilow has performed more than 500 Las Vegas shows since his first presentation at the International Theater was on January 12, 1988.

Tickets for MANILOW: LAS VEGAS – The Hits Come Home! performances through March 28, 2020 range in price from $49.75 to $329.75 plus tax and applicable fees and will go on sale on Monday, September 16th at 10am P.D.T. Tickets can be purchased at Ticketmaster.com, the Westgate Las Vegas Resort & Casino Box Office at (800) 222-5361 or online at www.barrymanilow.com or www.westgatelasvegas.com

Having sold more than 85 million albums worldwide, Barry Manilow is one of the world’s all-time bestselling recording artists. The GRAMMY®, TONY®, and EMMY® Award-winning musician has had an astonishing 50 Top 40 singles including 12 #1s and 27 Top 10 hits. He is ranked as the #1 Adult Contemporary Artist of all time, according to Billboard and R&R magazines.

The home of legendary performer Barry Manilow, the property features entertainment options in the International Theater and the Westgate Cabaret and has recently undergone nearly $275 million renovation that has encompassed every square inch of the property, including the addition of 300 timeshare villas, the all-new International Bar, a fully renovated pool deck, 1,200 remodeled Signature Rooms featuring the all new LUXE Rooms and the luxurious Serenity Spa in Las Vegas, which was awarded the 2017 Forbes Travel Guide Four-Star Award. For more information or to book our Las Vegas hotel and casino, call toll free at (800) 732-7117 or log on to WestgateLasVegas.com.