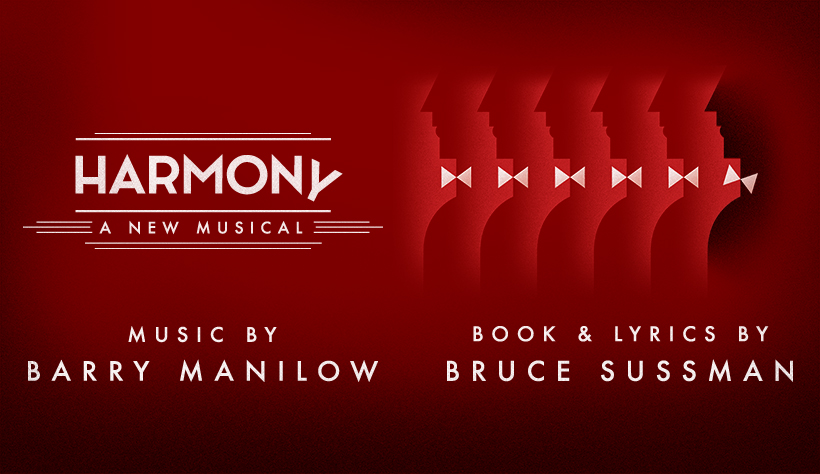 -Harmony tells the true story of the Comedian Harmonists, Six Talented Young Men Who Took the World by Storm in 1920s Germany-

(New York, NY)—Fresh from the stellar success of Fiddler on the Roof in Yiddish, the National Yiddish Theatre Folksbiene (NYTF), winner of a 2019 Drama Desk Award, in association with Tony Award-winning Producer Ken Davenport, will present the acclaimed musical Harmony by the legendary Barry Manilow and his longtime collaborator Bruce Sussman in February 2020. NYTF’s production marks the New York debut of the musical, which tells the true story of the Comedian Harmonists, an ensemble of six talented young men in 1920s Germany who took the world by storm with their signature blend of sophisticated close harmonies and uproarious stage antics, until their inclusion of Jewish singers put them on a collision course with history.

Harmony will be presented in English. Previews begin on February 11 and the production opens on March 4 through March 29, 2020, at the Museum of Jewish Heritage – A Living Memorial to the Holocaust, Edmond J. Safra Plaza, 36 Battery Place, NYC. Tickets, which start at $79, are available at www.harmonyanewmusical.com and www.nytf.org.

“National Yiddish Theatre Folksbiene is excited to bring Harmony to New York City,” said Zalmen Mlotek, Artistic Director of NYTF. “Harmony speaks to the human spirit in the face of adversity and atrocity. The story of the Comedian Harmonists, whose soaring careers were cut short due to anti-Semitism, reflects the spiritual resistance that was necessary to get through one of the most dehumanizing periods in history. It’s important that their story about the human spirit during the darkest of times be told. Barry Manilow and Bruce Sussman have created a show that speaks to the best and worst of humanity.”

“Harmony is finally being presented and I couldn’t be more thrilled,” Barry Manilow said. “I am very proud we have found a perfect home for this labor of love of over 20 years.”

“This is a show about the quest for harmony in what turned out to be the most discordant chapter in human history,” Bruce Sussman said. “I could not be more thrilled and proud that Harmony‘s New York debut will be in this theatre, associated with this museum, that overlooks the Statue of Liberty.”

The legendary Manilow and theatre veteran Sussman have collaborated for nearly a half century. Together they have written hundreds of songs for all media—films, television, and stage, including the Grammy Award-winning Copacabana.

Described by Rolling Stone as “the showman of our generation”, Barry Manilow is a Grammy, Emmy, and Tony Award winner, an Academy Award nominee, and has sold 85 million records. His theatrical roots go back to his days in the mailroom at CBS in New York, when, at 18, he wrote the entire original score for a musical adaptation for the melodrama, The Drunkard. The show ran Off-Broadway for eight years. He made his film scoring debut in 1994 with the Warner Brothers animated film Thumbelina, for which he contributed both songs and underscoring with his Harmony collaborator, Bruce Sussman.

His second animated feature, The Pebble and the Penguin, also featured songs by Manilow and Sussman. Copacabana – The Musical (written with Sussman) played a sold-out run in London’s West End for 18 months, toured the U.K and then the U.S. and is touring across the globe. Manilow was inducted into the Songwriters Hall of Fame in 2002.  In 2013, he finished a sold-out, six-week run, Manilow on Broadway, at the St. James Theatre, and currently is performing on Broadway for a limited engagement at Nederlander’s Lunt-Fontanne Theatre through August 17.

Bruce Sussman is the co-author of well over 200 published and recorded songs written for dozens of artists, films, television programs, and stage musicals. For the stage, he co-authored with Jack Feldman the scores for Ted Tally’s Coming Attractions (Outer Critics Circle Award, Pulitzer Prize nominee) and Wendy Wasserstein’s first musical, Miami, both produced Off-Broadway by Andre Bishop at Playwrights Horizons in New York. His songs have been featured in numerous stage revues, including The Madwoman of Central Park West, Tuxedos for Hire, and the long-running Off-Broadway and London productions of Whoop-Dee-Doo! (Drama Desk Award, Obie Award.)

Harmony was recently produced in Atlanta, GA, and Los Angeles, CA, where it won the LA Drama Critics Circle Award. The Atlanta Journal Constitution said, “Harmony thrills as a glorious work of art… This biography of the nearly forgotten Comedian Harmonists is… transformed by Manilow’s virtuosic score and Sussman’s briskly paced book and engaging lyrics… In the end, Harmony is a nearly flawless work of art that manages to cloak the harrowing underside of history in a bubble of elegance, sophistication and wit. At the end of the night, the waltz fades away, but the stars never dim.”

USA Today raved, “Harmony strikes a powerful chord.” The Huffington Post said, “Harmony is a rich, interesting, thoughtful, tuneful, dark, funny show—entertaining and heartbreaking…A wonderful evening in the theater.” And, the LA Examiner said, “A brilliant new musical, Harmony, captures an important story. Memorable and emotional… A definite ‘must-see’! Someone should hit the rewind button so I could sit back down and watch it all again! Five stars!”

With music by Manilow and book and lyrics by Sussman, Harmony tells the true story of the Comedian Harmonists, a group of six talented young men, Jewish and gentile, who came together in 1920s Germany and took the world by storm with their signature blend of sophisticated close harmonies and uproarious stage antics. Together they sold millions of records, starred in a dozen films and packed the houses of the most prestigious concert halls around the globe, until the world they knew changed forever. Their incredible story inspired music industry legends Barry Manilow and Bruce Sussman to create this spectacular new musical with an original score that celebrates this extraordinary group of friends and ensures their quest for true harmony in the most discordant chapter of human history will never be forgotten.

Serving as Producer is Ken Davenport, who most recently won a Tony for Best Revival of a Musical for Once on This Island and a Tony for Best Musical for Kinky Boots, and received Tony nominations for Spring Awakening (Revival of a Musical), The Visit (Musical), and You’re Welcome America (Special Theatrical Event). The creative team and casting will be announced soon.

Harmony is part of NYTF’s season of “Spiritual Resistance,” which features artistic and theatrical works that explore themes of struggle against oppression. The programming – which includes the one-woman show Hannah Senesh, chronicling the true story of a young woman who parachuted into Europe to save Jews from Nazi hands – provides artistic expression concurrent with the exhibition Auschwitz: Not long ago. Not far away. being presented at the Museum of Jewish Heritage – A Living Memorial to the Holocaust. NYTF won a 2019 Drama Desk Award for its work last season.

Now celebrating its 105th season, Tony Award-nominated and Drama Desk Award-winning National Yiddish Theatre Folksbiene (NYTF) is the longest consecutively producing theatre in the US and the world’s oldest continuously operating Yiddish theatre company. NYTF is in residence at the Museum of Jewish Heritage – A Living Memorial to the Holocaust. Under the artistic direction of Zalmen Mlotek, NYTF is dedicated to creating a living legacy through the arts, connecting generations and bridging communities. NYTF aims to bring history to life by reviving and restoring lost and forgotten work, commissioning new work, and adapting pre-existing work for the 21st Century. Serving a diverse audience comprised of performing arts patrons, cultural enthusiasts, Yiddish-language aficionados and the general public, the company presents plays, musicals, concerts, lectures, interactive educational workshops and community-building activities in English and Yiddish, with English and Russian supertitles accompanying performances. NYTF provides access to a century-old cultural legacy and inspires the imaginations of the next generation to contribute to this valuable body of work.

NYTF’s production of Fiddler on the Roof in Yiddish sold out for six months before moving to an Off-Broadway theater uptown. It has won a Drama Desk Award, an Outer Critics Circle Award and a New York Drama Critics’ Circle Award special citation and has been nominated for Lucille Lortel Awards, Drama League Awards, a Chita Rivera Award, and an Off-Broadway Alliance Award. For tickets to other performances in NYTF’s season of “Spiritual Resistance,” visit NYTF.org or call 212-213-2120 Ext. 200. For group sales and membership call 212-213-2120 Ext. 204.

The Museum of Jewish Heritage – A Living Memorial to the Holocaust is presenting the most comprehensive exhibition about Auschwitz ever seen in North America, Auschwitz: Not long ago. Not far away. until January 3, 2020. (Tickets are available now at auschwitz.nyc.) The exhibition features more than 700 original objects and photographs from over 20 international institutions, including rare artifacts. As visitors walk through the 20 thematic galleries, they will see the development of Nazi ideology and the transformation of Auschwitz from an ordinary Polish town known as Oświęcim to the most significant Nazi site of the Holocaust—at which ca. 1 million Jews, and tens of thousands of others, were murdered. This exhibition was produced in partnership with the international exhibition firm Musealia and the Auschwitz-Birkenau State Museum in Poland.