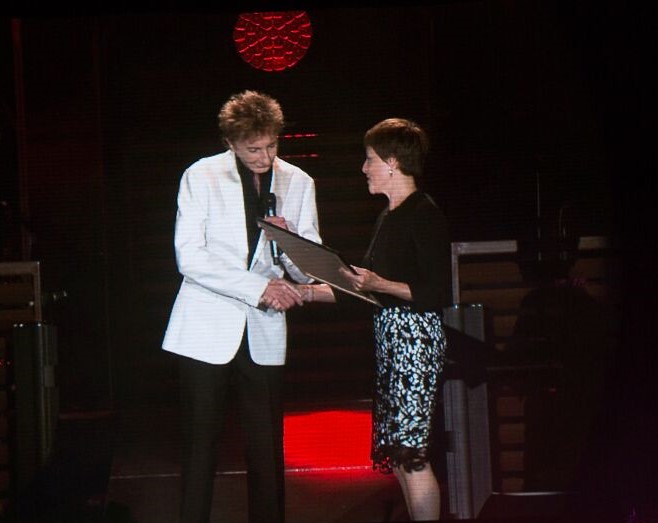 The Royal Northern College of Music (RNCM) based in Manchester has awarded GRAMMY®, TONY®, and EMMY® Award-winning musician, Barry Manilow with a prestigious Honorary Fellowship for his contribution to music.

The legendary singer, songwriter and producer was presented with the accolade during his concert at the Manchester Arena on Sunday 2 September in acknowledgment of his significant contribution to music and the music industry over the past 50 years.

With worldwide sales of more than 85 million records, Barry Manilow is ranked as the top adult contemporary chart artist of all time (R&R and Billboard magazines) and his success is a benchmark for popular music. With a multitude of hits, including Copacabana, Can’t Smile Without You, Mandy, I Write the Songs and Could it be Magic, to his name, it’s no wonder Rolling Stone crowned him ‘a giant among entertainers…the showman of our generation.’ He has received two Emmy Awards, three American Music Awards and a Grammy, as well as a Star on the Hollywood Walk of Fame and a place in the Songwriters Hall of Fame.

On receiving the Honorary Fellowship, he said: ‘I am honored to have been chosen to receive this prestigious fellowship and thank the Royal Northern College of Music for this acknowledgement.’

The RNCM is a world-leading international conservatoire and thriving live music venue, with a reputation for attracting talented students, teachers, conductors, composers and artists from all over the world. In 2015 it became the first conservatoire in the UK to offer a four-year degree in Popular Music, complementing its traditional classical music offering. Today, 160 students from 20 countries are studying for the degree, now recognised as one of the most respected in the world.

Andy Stott, Head of Popular Music at the RNCM, said: ‘The RNCM’s Popular Music programme aims to produce professional musicians who are top quality performers and original artists in their own right, and I’m delighted that we are able honour the career of a musician who has been just that for over five decades. Barry Manilow is an icon of the pop music industry – not only is he a prolific songwriter, charismatic performer and producer, but he is a truly outstanding musician whose work has been enjoyed by millions of people around the world. I look forward to developing a relationship that will enable him to inspire our students creatively and to make a positive and influential impact on their careers.’

After the concert, Popular Music students, together with Andy and Linda, were invited backstage to meet Barry. Keyboard player Samuel Capper said: ‘He’s an inspiration to any young musician who wants to have a prolonged career doing what they love, to see someone stay at the top for so long making people so happy, it’s just really inspiring.’

Vocalist Nicole Battick added: ‘The music industry is often described as fickle and fleeting, but the concert was testament to how loyal and rewarding it can be. Seeing thousands of people gathered to support Barry after so many years in the industry was incredible and to think that he now has a relationship with our institution fills me with pride!’ While keyboard player Andrew Jones noted: ‘Barry and his band put on a brilliant show on Sunday. It was a pleasure to meet him and it’s fantastic that the Popular Music course has such a successful and high profile supporter!’

Barry Manilow is currently touring the UK before returning to America at the end of September to his successful Las Vegas residency at the Westgate Resort and Casino.